A new exhibition at the Fowler Museum at UCLA features posters about U.S. movies, Cuban cultural events and documentaries, showcasing the striking and influential work of Cuban graphic designers.

Black with a Drop of Red: Contemporary Cuban Poster Work includes 29 posters and prints from a range of Cuban designers. The exhibition will be on view in the Fowler’s Goldenberg Gallery from Oct. 16 through Jan. 22, 2017. Carefully chosen by Claudio Sotolongo, a designer and a professor based in Havana, the images reflect on Cuba’s fascination with cinema as well as its internal and external political struggles. 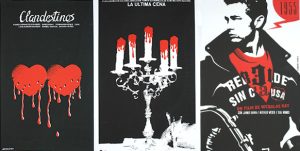 Whether advertising a popular film, a documentary honoring a cultural hero, or announcing a community event, the posters included in “Black with a Drop of Red” illustrate the visual persuasiveness of the genre. Using silkscreen printing techniques, the 16 designers included in the exhibition demonstrate the continued allure and influence of poster work in contemporary Cuba.

While similar examples produced in the United States often emphasize celebrity close-ups or dramatic moments as a way of enticing visitors and fans, Cuban posters often embrace a different, more eclectic aesthetic that emphasizes the power of distilled imagery to convey the essence of an entire film or an event.

The Fowler Museum is also hosting the first U.S. solo exhibition dedicated to the work of the late Cuban visual artist Belkis Ayón, who during her short but fertile career, produced an extraordinary body of work central to the history of contemporary printmaking in Cuba. “Name: A Retrospective of Cuban Printmaker Belkis Ayón” presents 43 prints that encompass a wide range of the artist’s graphic production from 1984 until her untimely death in 1999.

The Fowler Museum at UCLA is one of the country’s most respected institutions devoted to exploring the arts and cultures of Africa, Asia and the Pacific, and the Americas. The Fowler is open Wednesdays through Sundays, from noon to 5 p.m.; and on Thursdays, from noon until 8 p.m. The museum is closed Mondays and Tuesdays. The Fowler Museum, part of UCLA Arts, is located in the north part of the UCLA campus. Admission is free. Parking is available for a maximum of $12 in Lot 4. For more information, the public may call 310-825-4361 or visit fowler.ucla.edu.